The misadventures of an American woman and her daughter as they try to acculturate while living in Shanghai, China

Frank Li, one of my new friends here in Shanghai, shared an analogy about the differences Chinese people perceive in foreigners who come to China.

“Birds” move only within the “cage” of what is familiar from Western culture. They could just as easily be living in New York.

“Chickens” peck around and explore, but never venture too far beyond what Chinese friends help make accessible for them.

“Pigeons” take a deep breath and immerse themselves in the world that is China. They inevitably learn Mandarin or other Chinese dialects, because their adventure would be awfully difficult otherwise. 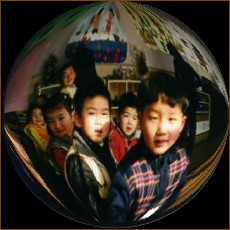 After nearly three months here, I’d call myself a chicken who hopes to live long enough to become a pigeon some day. My daughter, Vanessa, is a genuine pigeon. She began her life in China two years ago, is living in the second city she has called home here, and has warned her Chinese friends not to plan surprises in front of her anymore because she understands everything they say. She’s also brave enough to try speaking the complex language she has learned only by listening, and I’m proud to observe her courteous dialogue with taxi drivers and shopkeepers. (It’s fun to see surprise light in their glazed-over eyes after that five-second delay when they realize, “This foreigner is speaking Chinese – and sounds like she’s Chinese!”)

Just weeks before my husband and I came to visit our daughter last fall, I’d never have dreamt that such cross-cultural experience would become part of my daily life. (We first visited China with her brother in 2000, and quickly understood why she loves being here.) We came to Shanghai, a huge city of 16 million, in October, just days before it became a focus of world attention when it hosted the APEC convention and China joined the World Trade Organization.

When the school for which Vanessa teaches English to kindergartners opened a branch here in China’s largest city, the response was beyond what anyone imagined. The time is apparently right for a curriculum that encourages virtues while it also teaches English in creative ways. The local education bureau was so pleased with this approach that there were 1,000 potential students here this fall, and only one “foreign” teacher, our 21-year-old daughter. While foreign-teacher recruitment proceeds, I’ve stayed on in Shanghai to help teach during the school’s very busy first term.

I teach 12 classes a week – 300 of the sweetest kindergartners I’ve ever met. We teach in their own classrooms, and when I call them to the front for practice, I receive about 20 enthusiastic hugs. The teaching materials, which Vanessa helped develop, make the job easy even for a neophyte like me. I simply have to protect my voice (seldom used during my freelance-writing hours back in New Hampshire, USA), because in addition to word repetition and games, I also lead a lot of singing.

One of the most moving moments I’ve experienced was when an entire class spontaneously sang the Chinese National Anthem in the middle of a lesson. Oh, they were very respectful, of course, wanting to do the right thing. But when the music began drifting in from the courtyard outside, they looked at me, and some began to rise uncertainly, and when I nodded and stood and faced the window myself, their sweet voices sounded all around me.

I always have an English-speaking Chinese partner, because even though the kids can understand much of what I say, my Chinese is nearly non-existent. I’ve collected enough phrases to be polite and cordial-hello, good-bye, thank you, please, etc. Now I’m struggling to learn a phrase or word each day, a process complicated by Mandarin’s use of tones. The same-sounding word can mean “cup” or “quilt,” for example, depending on where you place the tone. Among the more useful phrases I’ve learned is “please wait a minute,” (“qing deng yi xia” – sounds sounds like “ching dung ee shah”), which helps me answer the phone – and buy time.

When I arrive in class, the kids crowd around, updating me as I set up my stuff. “We had soymilk for snack,” or, “So-and-so is sick today.” I don’t actually know what they’re saying most times, but the Mom in me can kind of intuit it and we have short Chinese-English “conversations.” But adults are a whole other story. “‘Qing deng yi xia'” – hey, somebody come help me!”

The 16th-floor apartment where I live looks out on Shanghai’s skyscraper skyline. Our neighborhood’s blocks of bustling streets are safe and friendly, and you find things in proximity to each other that you’d seldom see back home. Our luxurious (by local standards) high-rise looks over tenements patrolled each evening by a bell-ringing man. As I took my walks, I discovered that he offers trash-collection (and, by default, recycling service). The city may provide it weekly, but these homes are too small and close together to store it that long.

The restaurant around the corner, a Rolls-Royce of a place that cost an alleged $2 million just to decorate, abuts one of my favorite fixtures here, the Three Gun Company, China’s largest producer of long underwear which, at this time of year, most everyone’s wearing.

My 15-week sojourn puts me in the middle of Shanghai winter’s penetrating winds and cold, a singular experience, even for a New-Englander. Only tourist hotels and major department stores have central heating, and I can stand it for about 15 minutes before I leave gasping for breath. Homes like mine, and those of most people I know, have air-conditioning/heating units on the walls and as with electric heat in the US, the goal seems to be to put off using it for as long as possible. I was astonished to learn that the “old-style” homes of my friends’ elderly parents (where I have received some of the most heartwarming and generous hospitality) seldom have these. I’ve come to appreciate the value of bringing gifts like quilts, long underwear, and down garments.

Local-culture experiences include a trip to the blanket stall to buy quilty comforters inside thick flannel covers. “One is plenty,” the hardy Shanghai merchant waves his hand dismissively. I currently have two thick ones on my bed and would sneak another on if I weren’t too proud. I resort to layers of sleeping clothes instead.

Another popular activity is “hot-pot” restaurants, where you dine at a table with a huge boiling caldron in the middle in which you cook whatever ingredients you order. An indicator of cold weather on the way is when you see these places stocking in huge amounts of food.

MAY I CALL YOU AUNTIE?

There’s a distinct advantage for middle-aged Western women in China: Everyone thinks you look young – and repeatedly tells you so (which could keep some of us here for years.) However, because my age has earned me the status of “Auntie” (what all my young housemates and co-workers call me), everyone wants to help me and won’t let me do a THING for myself.

In true Chinese style, most everything you do becomes a group activity. I’ve been part of many carefully planned visits to history-filled, tourist-destination cities like Hangzhou and Su Zhou, but the group approach is part of everyday life, too.

I felt most like a native the day two of the school’s staff members helped me move my bedding from the apartment where my husband and I stayed to the place three blocks away where I now share a room with our daughter. Folks seem to move bedding through the streets on foot here all the time, but I was relieved to learn that we’d include a taxi in our plans.

After consulting about how to pack and transport everything, we rolled the sheets, quilt and blanket together and folded and tied then in a bundle with a “handle” through which I could insert my arm. The two men wrestled the stiff cot-style mattress into submission and managed to get three-quarters of it into a huge yellow plastic bag. The pillows and their cases made good transport for the towels and other items.

We squeezed into the narrow elevator with an astonished-looking woman without touching any walls or floor (always deemed “unclean” in China). Then, because we couldn’t simply hail a taxi from the front door, the building being set back from the street, Frank, the younger of my helpers, balanced his huge mattress bundle between the two of us and ran to find a taxi. Naturally, one passed him, so we saw him running Marx-Brothers-like back behind it, while my companion and I tried to hail it with the appendages we had left to use – our heads and feet. By the time the two of them literally pushed me into the back seat with my bedding bundle clutched in front, we resembled the urgent scene of rushing an enormous pregnant woman to the hospital.

China, a study in so many contrasts, is always an opportunity to observe how large numbers of people have learned to live thoughtfully in small spaces – and maximize every possible resource. None of my Chinese friends owns anything he or she doesn’t use regularly.

In one of my many taxi rides to a kindergarten one morning, rush-hour construction forced us off a six-lane highway into a wonderful glimpse of everyday China. On this smaller side road, bicycles (always the most plentiful vehicles here), reigned supreme, with auto traffic having to dawdle and accommodate them.

Cyclists included businesspeople in suits with mobile phones to their ear; grandpas and nannies with their toddler-age charges; families of three (granted, at least one was very small); commuters swigging tea from jars or munching their steamed-bun breakfast; and of course, lots of uniform-clad students on their way to school.

There were also those icons of hard-working, resourceful China – women wielding loads of produce on shoulder poles, and workmen carrying eight-foot scaffolding as they rode. In this nation that’s scrambling to catch up with its more-developed cousins, such laborers sometimes pad barefoot alongside the newly rich in their designer clothes, and most all of them work very long days. Work at the construction site across the street, as in most of China, runs 24 hours a day.

One image will always represent for me all the enigmatic things I will never come to understand here. Riding beside my taxi one day was an unconcerned-looking cyclist with a pink, three-quarter-length mannequin – no head or lower legs – cradled under his arm as he rode, headed for some unknown destination. Just another day’s work, I suppose.