On a balmy summer evening in 2000, thousands of San Franciscans gathered to protest the eviction of artists by greedy landlords. Here are the photos. 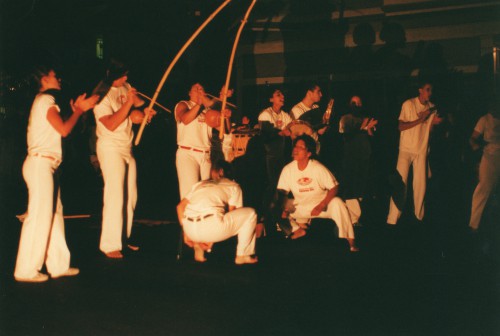 On a balmy evening in San Francisco, nearly a thousand artists and friends cram into one narrow block in the historic Mission District in a show of support for a local dance company that had lost its lease. 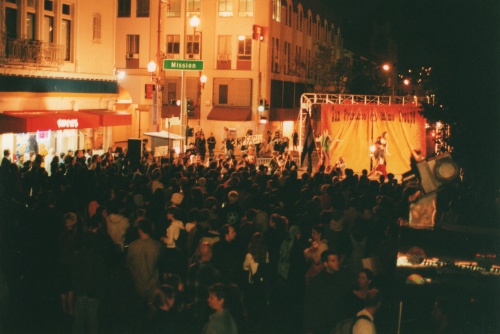 But unlike your typical rally in this city famous for its radical activism, no blistering speeches thunder from the PA system and nobody marches on City Hall. Instead, dozens of artists express their anger, frustration, and resolve as they always have, through their art. Whether to dance in saucy cabaret routines, witness mysterious fire rituals, or display macabre sculptures, they come because they love to show off, because this is how artists have always mourned their own, and because they know that tomorrow they may be next.

Appropriately, the event has been dubbed “Circus of Resistance”. 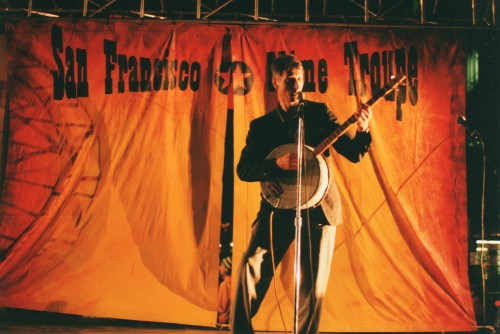 Dancers’ Group Studio Theater has occupied the same 22nd Street building for eighteen years, which has housed one dance company or another for the past half-century. But this year new landlords raised the monthly rent from $3,000 to over $15,000, and after months of futile negotiations the troupe is due to be evicted at midnight. Only one of many recent losses for local arts organizations, it represents a disturbing real estate trend in several major metropolitan areas. 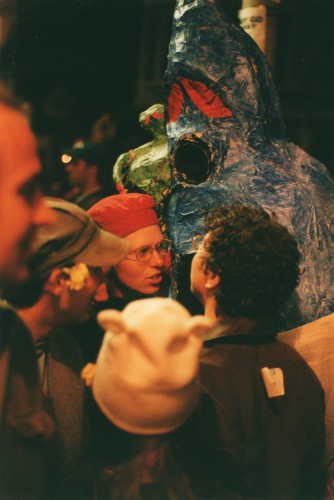 But the first step involves sending poor and working-class residents, small businesses, and non-profit organizations packing. “We’re all really affected by the hysteria” of rising real estate prices’ effects on artists and the poor, says Keith Hennessy, media liaison for AARGG! (All Against Greedy Ruthless Gentrification), which organized the Circus.

On a conceptual level at least, he links tonight’s festivities with protest movements worldwide. “I don’t think that there’s anything separating people who organize this demonstration from people who organize demonstrations against the encroaching corporate takeover of the world, and what’s being called neoliberalism or the newest crop of globalism.” 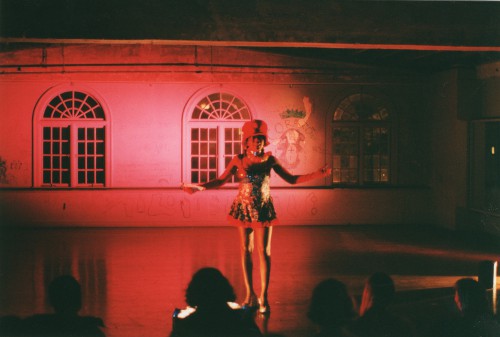 Many evictees end up moving out of the city altogether. But according to Hennessy, who just returned from a visit to Boston, the crisis isn’t merely a local phenomenon. “They’re seeing their rents approach New York prices just as San Francisco has — we exceeded New York’s average this year — and pretty much everywhere this forced removal of the poorer populations.”

When asked if he knows anything about rumors of an activist takeover of the building at the stroke of midnight, he pauses for a moment and then smiles cryptically. “Yes I do. Basically that’s a rumor.” 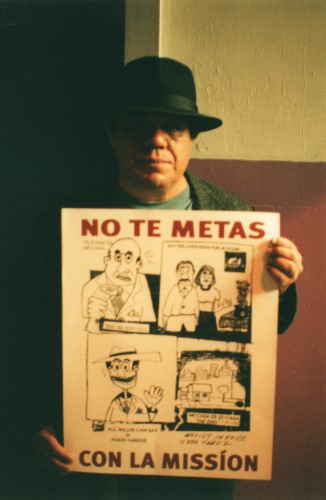 In the shadow of the main stage, conceptual artist and curator Rene Yañez and two young associates man a small table overflowing with posters and flyers protesting the loss of affordable space, including a satirical newspaper article reporting an anthropological sighting of the “Last Mexican in the Mission” in the year 2002. A forty-year veteran of Mission district and Latino art circles, Yañez knows dozens of artists forced to move away from their own neighborhoods in the past year alone.

The Mission district – named after one of Father Junípero Serra’s original 18th century mission buildings, still standing a few blocks away — has traditionally housed much of the city’s Latino community, also now in danger of being displaced. Although most attending the Circus are not Latino, artists and residents form a united front to protect their way of life. 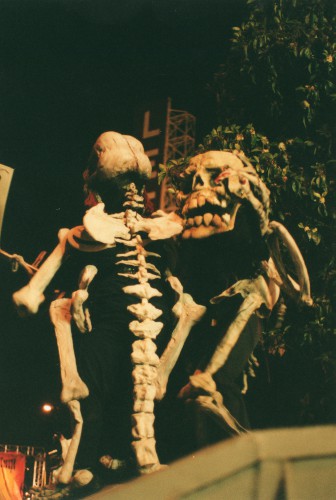 Hugo Arana, a district resident for twenty years, has also witnessed many families and friends lose their homes to gentrification. So he has brought his young son Camillo to enjoy the festivities. “I like to see people getting together, and to organize, and to do something about the evictions and the displacement of the artist community,” said the elder Arana. “You have a large community of artists, muralists, painters, dancers, graphic artists. They have given a character to the Mission District for so many years. It’s sad to see them go.”

Camillo is himself a budding artist, and adds that he likes to “play with sticks and rubber bands and that kind of stuff.” 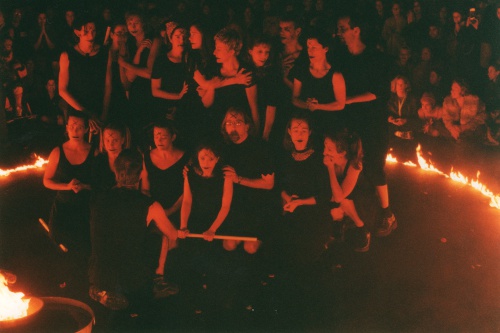 At the west end of the street a small floodlight illuminates an informal circle of shouting, applauding spectators. In the center, dancers from the ABADÁ Capoeira cultural center wow the crowd with an Afro-Brazilian blend of martial arts and acrobatics.

Afterwards, a slightly breathless executive director Jennifer Walsh explains that the center has sought to bring hope to the Mission by helping residents express their cultural heritage. “When we first came into this neighborhood there was a strong feeling of home here, and the people that were here were local people, people that worked here, people that lived here. Now there’s this influx of new energy, but it’s suffocating the community. You see people who you’ve never seen before coming to eat at restaurants that all of a sudden just popped up yesterday. They are bringing in new things that only they can be a part of.” 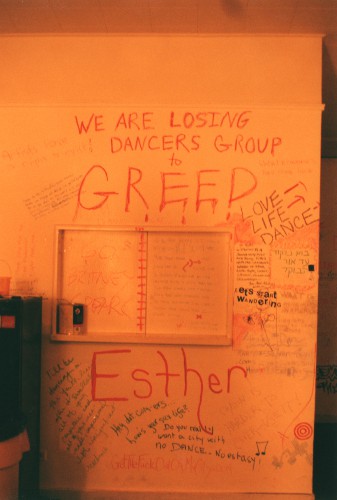 The culture shock goes both ways, she continues. “They don’t understand why there’s gang shootings in front of the door and they need to run into our space because they’re so out of place. Everything’s happening so fast there’s no time for these transitions to take place. It’s too fast and it’s a big clash.”

Getting into the Dancers’ Group building itself — now running on portable generators after the electricity had been cut off – often requires standing in line. A doorman explains to one impatient visitor that organizers fear violating fire regulations by admitting too many people at one time. “It’s mostly a matter of math,” he says. 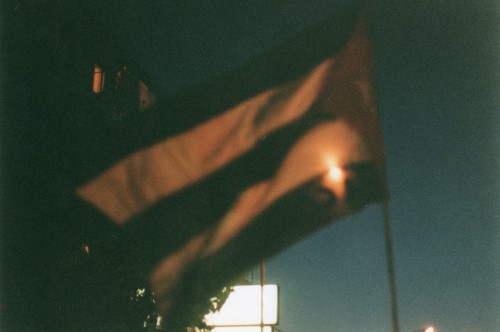 “Excuse me,” she replies, “but I’ve been here before and it’s been much more crowded.”

“We didn’t have a battalion of cops waiting for an excuse to shut us down,” he barks back. The exchange ends, and eventually the line begins to move again.

In some quarters, San Francisco police do have a reputation for breaking up events they don’t like. But the dozen or so officers present seem to be more interested in milling around a nearby taqueria, which also serves as a way station for participants. 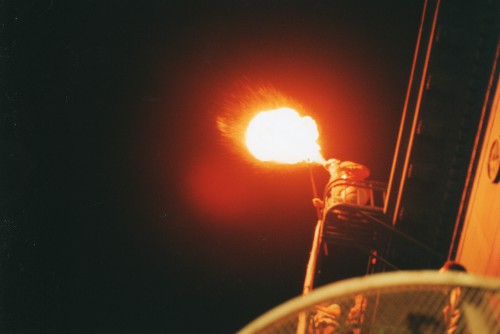 One officer stands alone guarding the barricades lining the west end, although from what it’s hard to say. When asked how long the police planned to remain, he replies “until it ends, which is hopefully soon. It’s a work night, so it would make more sense to me to just make their point and go home.”

But is there still a point to make? Local real estate interests have so far proved to be a nearly unstoppable tide of economic and political pressures. Many traditional artists have already fled the city with their paints and pots for cheaper lodgings in such nearby communities as Oakland or Alameda. The new breed of digital artist depends largely upon the Internet for exposure, and in any case is more likely to embrace the city’s growing high-tech environment. 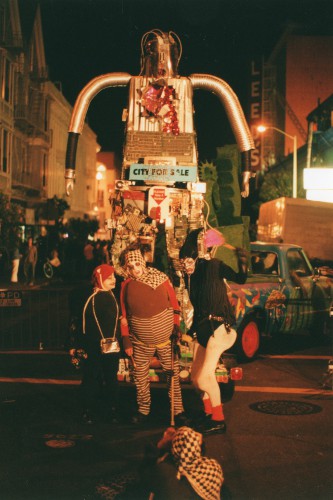 So some might question the wisdom of the arts community “hanging on” to San Francisco, when creative energies could be more productively spent elsewhere.

Yet some manage to keep the faith. Keith Hennessey firmly believes in the value of “actual centers where we gather, where we dance together, where we do ritual together, where we see live art together. San Francisco’s always been a home for a kind of frontier mentality, new arts culture, and I think we need to try to hang onto some of what we’ve got here. The history is too great to throw it away in one generation to a bunch of rich newcomers.” 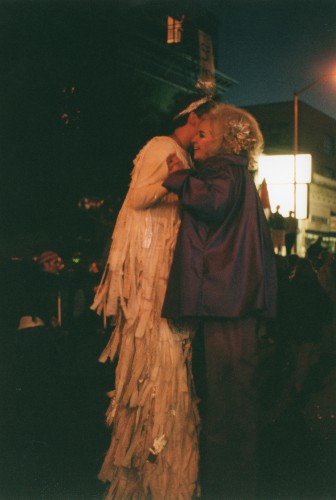 Leaving the district via Mission Street toward the Bay Bridge takes one past rows of late-model sedans, sports cars and SUV’s. Quite a few congregate around an old building with a new sign, The Butterfly Club. Somehow the title seems appropriate to young urbanites in search of the next trendy spot, or artists in search of the next place to call home.

Postscript: At midnight activists staged an occupation of the Dancers’ Group space at 3221 22nd Street, where they held out for two days until peacefully escorted off the premises by San Francisco police officers. It was then reportedly placed on the market at $15,500 per month. 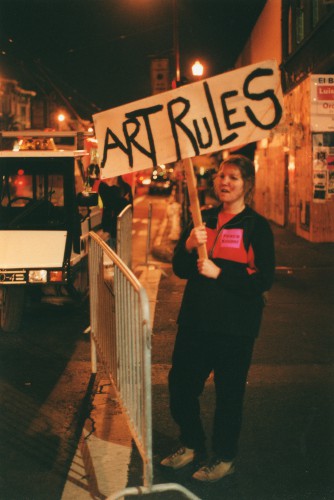 Text and images are Copyright © 2000 by David Arv Bragi. All rights reserved.

David Arv Bragi is the editor of the grail multicultural blog.