Gloria Bowens of Salem, MA, couldn’t have imagined what two quilt tops she found at a yard sale would eventually lead to.</p>

Pristine to her collector’s eye, their fabric showed designs more common a century before. “Someone obviously put them away in a chest to finish later,” says the former public-schools administrator.

She’d almost forgotten them herself when she saw a television interview with art historian Raymond Dobard who, with Jacqueline Tobin, wrote Hidden in Plain View. The book shares the code system described by South-Carolina quilter Ozella McDaniel Williams that connects early African-American quilt designs to activities of the Underground Railroad and asserts that when aired out on plantations, such quilts communicated how and when slaves could escape. 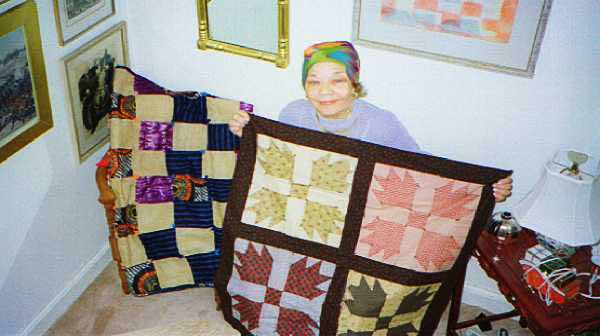 While some debate the codes’ authenticity, the National Security Agency, which designs cryptologic devices to protect U.S. information systems, recently published a supportive article about them. Bowens believes the book contains valid elements of the quilt-code story yet recognizes that oral tradition “gets embellished.” As an educator, she finds that her first love — good research – is essential to capturing history accurately. Her quest has led her to sources that include Barbara Brackman’s Quilts from the Civil War, Gladys-Marie Fry’s Stitched From the Soul, and Wilbur Siebert’s classic, The Underground Railroad: From Slavery to Freedom.

As she unearths the facts, Bowens’ informative lectures revolve around a collection of 10 quilts supplemented by two she had made from those yard-sale quilt tops. This “quilt tour” illustrates her research into the theory that slaves living on South Carolina plantations from 1680-1850 used quilts as coded messages toward freedom. Her audiences include quilting guilds, visitors to the American Textile History Museum, and the National Parks Service, with whom she works to identify Underground-Railroad locations in the Northeast.

Once she learned of the quilt codes, Bowens dug out her yard-sale purchases and had their age verified. Although made a decade after slavery’s abolition, both were still associated with that period of history.

“It’s exciting they came even that close. Actual slave quilts are very rare,” she says. “Their materials didn’t hold up, especially when laundered by hand with lye soaps.”

This is why African-American heirloom quilts often have fabrics that, like Bowens’, date back no earlier than the 1870s. Slavery-era quilts are more likely to be hidden inside quilts themselves than hidden in plain view, she says.

“Slaves found it very difficult to get filler for quilts and often slid an old quilt inside the cover of a new one. Families should be suspicious if quilts are heavy and may want to carefully open a seam and check.”

Some argue that slaves had no time to make such quilts or learn their codes. Certainly, the quilts slaves made for themselves differed from the applique designs they sewed for their mistress. Many resembled the crazy-quilt design of one of Bowens’ two antique quilt tops, the kind of quilt that “used up every type of scrap, and whose non-linear design was intended to ward off evil spirits during sleep.”

Slaves learned about quilt codes through sampler quilts that featured all the patterns, Bowens says. “The smallest children could learn what these meant, both while stitching, and while listening to stories of the elders who baby-sat them. Samplers were also part of slaves’ quilting bees where both men and women gathered.

The first coded-quilt design was the “Anvil” or “Monkey Wrench.”

“The monkey wrench turns the wagon wheel toward Canada on a bear’s paw trail,” Bowens recites an old proverb. “This meant an important visitor was coming with a message about escape.” The blacksmith’s anvil was a fixture in African villages. Its symbol also designated a “king’s throne,” hence its allusion to an important person.

“Wagon-Wheel” or “Bear’s-Paw” patterns were alternatives in the second code, which foretold escape either by wagons with false bottoms or over woodland trails made by bears — “during mid-February to mid-April while bears were still hibernating, Bowens notes.

The third design, five dark squares that form a cross, represents an important “Crossroads” where slaves would encounter a message or helper. The contemporary African fabric of the quilt South-Carolina quilter Tom Mack created for Bowens recalls the indigo that slaves commonly grew in Africa and later introduced to their masters. Burlap squares represent the fabric they rescued from grain sacks.

At the crossroads, slaves would “dig a log cabin on the ground,” or find safe shelter. “Log Cabin” shows red-centered squares that represent the warmth of an Underground-Railroad safe house.

The fifth pattern, “Shoofly,” a square with triangles at the corners, stood for an Underground-Railroad “conductor” who would lead slaves away from a plantation. Often, Bowens notes, a quilt with the “Wild Goose Chase” pattern was also placed somewhere near the rear of the mansion to indicate the direction from which “Shoofly” would appear.

“Shoofly told them to dress up in cotton and satin bow ties and go to the cathedral church, get married and exchange double wedding rings,” the proverb continues. “They’d need to wear their Sunday-meeting clothes in order to pass as free,” Bowens explains. “‘Double wedding rings’ means that men and women needed to stay together as ‘couples’ or family groups so as not to stand out.”

Her sixth design, an Amish quilt, depicts the “Bow Tie” or hourglass design, which had spiritual significance across Africa in the 17th century.

“That’s fitting, because this represented a point of decision for slaves spiritually and psychologically,” Bowens says. “After a life of submission, they had to find the courage and will to stand up tall and walk in places like they belonged there. This quilt asked whether they were ready. Not all could say yes.”

The triangles of the seventh pattern’s “Flying Geese” pointed north or south depending on the escape route. Following geese and listening for their calls also blazed a northward path and led to fresh water, says Bowens.

Quilt nine, the eight-pointed “North Star,” symbolized north — often Sandusky, or other Ohio destinations — so much so that it became known as the “Ohio Star.”

Quilt ten, “Tumbling Blocks,” stacked like packages, was the last quilt slaves would see, indicating that it was time to pack and get ready.

Bowens’ other antique quilt, “Nine Patch,” rounds out the collection and is a part of a secondary code Ozella McDaniel Williams described. “This denoted a garden or cemetery where a message in a sweetgrass basket or a former slave would direct fugitives to a safe house,” she says.

“Documentation shows enslaved Africans were already familiar with these symbols, which were found across Africa as early as the 11th century,” she says. “Slaves came from hundreds of different villages. These symbols were a ‘language’ they had in common. It makes sense they’d use this visual communication, along with the cryptic messages in the spirituals they sang.”

The quilts’ imagery and story also reinforce that skills like blacksmithing and needlework were ones Africans already possessed, not ones they acquired here, Bowens says.

“Most of all, the quilts underscore that whatever the circumstances, from the moment ships first brought them here, enslaved Africans never stopped seeking freedom — for their children, if not themselves.”

After artist Richard Haynes Jr. heard Gloria Bowens speak about the Underground-Railroad quilt codes at the inauguration of New Hampshire’s Seacoast African American Cultural Center, his series Hidden Journey: Hope-Struggle-Freedom was born. Using the lush, glossy colors of caran d’ache, he combined each quilt pattern with the image of a family making this “Hidden Journey.”

In particular, Haynes wanted to convey both the history and the humanity of enslaved people’s escape to freedom. Throughout the paintings, the five bodies remain pressed together, the essence of family that Haynes so often depicts in his art. “It’s a counterpoint to what slavery typically did to Black families, and represents that when struggle is shared, it brings families closer,” he says. “What we do has more strength when it’s done in unity.”