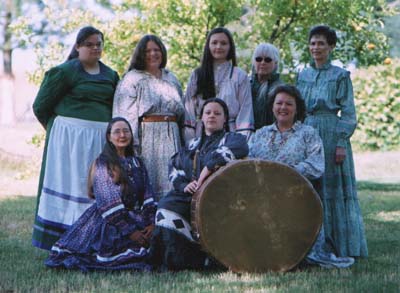 Feather River Singers is a Native American Indian Women’s Northern style contemporary pow wow drum that performs in both the Cherokee and English languages. They recently released Daughters of the Earth, a CD of original music, which includes healing songs for the Earth, pow wow dances and songs that honor warriors.

One of the most striking tracks, “Women Warriors of the 507th”, is named after the ill-fated US Army maintenance company in which Lori Piestewa, Jessica Lynch and Shoshana Johnson served with distinction during Operation Iraqi Freedom.

Barbara Warren, a retired Kindergarten teacher who is active in Indian Education programs in California, writes songs in the Cherokee language and is a drumkeeper for Feather River Singers. She kindly consented to be interviewed for New Tribal Dawn.

What brought your group together in the first place?

“About 10 years ago the American Indian Education Program of Marysville provided the opportunity for interested people to participate in a class in drumming. The result of this opportunity to learn from several good drum instructors was the creation of the northern drum we named Feather River, and an offspring of that, Tsalagi Thunder, composed of some members of the Cherokees of California.*

“Over a period of time Feather River was comprised of 7 women singers, and we decided to become an all women’s northern-style drum group and called ourselves Feather River Singers. Our drum was made for us by a respected traditional drum maker, Robert Skaggs.”

As I understand it, you worked with a language expert; care to elaborate on the process?

“Prentice Robinson of Tulsa is a well-known Cherokee linguist and creator of Cherokee language materials. I have had a friendship with Prentice and his wife, Wilena, over a number of years stemming from being involved with learning more about Cherokee language, and then sharing what I could with interested people.

“On several occasions, Prentice and Wilena have come to Marysville to do a language presentation at the request of the Cherokees of California and the American Indian Education Program of Marysville.

“In many pow wow style songs, vocables rather than words are often used. However, for me it is important to incorporate Cherokee, the indigenous language of my people, in the songs I am given. I also strive to be grammatically accurate. Prentice is my resource as a language consultant.”

What did it feel like to record out-of-doors, instead of in a recording studio?

“It felt “right at home”. Being in touch with Mother Earth and the natural elements that surrounded us, infused our songs with more than music. The theme of our album reflected the value we place on Mother Earth. We recorded in a grove of centuries old blue oaks that inhabit the ranch property on which I live.

“Our sound studio was in the horse pasture under the oaks at my home. We didn’t have the opportunity to re-record songs until all flaws were eliminated. What you hear is what we did that day.

“Larry** placed microphones in several trees so we could pick up the bird sounds. Our insert was designed by us and Larry was our graphics person. One of our members, LE Honeycutt, did the artwork.

“The mountains are the Great Smokeys, the Cherokee homeland. The seven birds represent the seven Cherokee clans. The cedar tree has a special meaning for Cherokee people. Although our music is unpretentious, we hope our enthusiasm and love of what we do make up for all our rustic qualities (smile). It took a long while to complete this project, but what a learning time for us all!”

What inspired the strong warrior theme threading through the CD?

“I hadn’t thought about warriors as being a theme. Each song came as its own entity.

“The Flag Song speaks about the flag being carried by the warrior – or now days, veteran. This flag song has been sung at many pow wow grand entries. At a pow wow, veterans are considered warriors and only veterans can carry in the flags.

“Stai yu, a Sneak-up song, was created by the group-this kind of song is danced by traditional men dancers – they are our warriors. Hence that was the theme of this song.

“When a song comes to me, I usually have a strong compulsion to get the song out. I am told songs are given by Creator because someone is in need of it. Women of Warriors of the 507th came about in such a special way, it still gives me goose pimples when I think of it.

“I felt Feather River Singers needed a Veteran’s song, but I felt strongly it should be one that included Iraqi Freedom, and I felt drawn to the story of the women of the 507th. The song came together in the way that it did – not as a Veteran’s song, but more of an honoring song for these women who represent all women warriors.

“I have known Tommy Wildcat since the early days of his career as a native flutist. He has come to our area on a number of occasions to share his beautiful music.

“One of Tommy’s songs on his latest album, Pow-Wow Flutes, is “Dragging Canoe”. He explained to me why he chose to create a song for this great, but historically neglected, Cherokee warrior. My song, “Dragging Canoe” is a result of Tommy’s inspirational talk that day.”

What sort of reactions have people had to that theme?

“Women Warriors of the 507th has been received very well. I cried when I first put this song together and I realized immediately what power this song had. When I presented it to our drum, the singers were moved as I had been. Many people tell us they are touched by this song.”

Women’s drum groups are still relatively new to Indian Country; what is it like to be in one?

“Actually I didn’t realize that when I first began drumming. One of the first women’s drum groups to appear in the 1990’s was the Mankillers based in Redding, California. They helped pave the way for other women’s drums and are still an active drum today.”

What sort of reactions have people had to your being a women’s drum?

“For the most part, we have been received very well.

“California is a unique place with a diverse population of Native Americans. We have more American Indians than any state except Oklahoma. Our pow wows are gatherings of many various tribes and Nations, so we probably do things a bit different than in other states.”

Do you have any new recording projects, or will you concentrate on touring?

“No new recording projects; we just got this one finished. Now we will have to sell enough CDs to pay for the project before we can begin again. But we are building a new song bank!

“In regards to touring, actually we look at what we do as a service for the people. We hope to continue to have many opportunities to sing for cultural and educational presentations. Pow wows spiritually revitalize us, so we travel to as many as is feasible.”

* The Cherokees of California is an independent, unrecognized tribe of culturally-active Cherokees living in California.
** Larry Badger, who served as sound engineer along with Curt Burrows and Joyful Sound.