Native American children should listen to their elders, before it’s too late 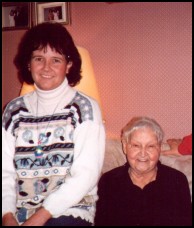 Annette Biggart with her mother.

For as long as I can remember, I always knew that I was Indian, but I also knew that we could never talk about it in front of my Grandmother. For whatever reason, she would have a fit of rage if anyone asked her about it. She would say that she was NOT Indian and that she didn’t want to hear any of us say otherwise. We never knew why she denied it.

Her maiden name was Georgina Williston and she was from a town in New Brunswick that was on the St. John’s River. Her family has a homestead there still. The town was at one time along the main route through New Brunswick, but since they built a new highway, my father said that it was way off the beaten path. I believe he said that the name was Something Cross or Crossroads. We never knew about the rest of her family. I know that she was Micmac.

My Father eventually did find some of his cousins in New Brunswick. He had visited with them a few times, but when he tried to find them again he couldn’t. They had rerouted the road to the village where they lived and he couldn’t locate them, at least not until several years later.

I can remember one of those trips. I was quite young, about 7 or 8 years old, my Grandmother had died that past summer. We stopped at a trading post at one of the Indian villages and a woman came over to talk to me and I remember screaming and running away. This woman looked so much like my Grandmother that I thought she had come back from the dead.

That poor woman! I don’t know if she ever knew why I did that. My father talked with her a while then we left. I know that she had to be a relative. For all I know, she could have been my Grandmother’s twin.

My Grandfather, John Ellis, was also Indian. I believe that he was from either the Penobscot or Passamequoddy (spelling?) tribe. We believe that this is true about him because we used to hear stories about the Scots coming and taking and raping the women of the tribe in his grandfather’s time. This did indeed happened to the Penobscots. 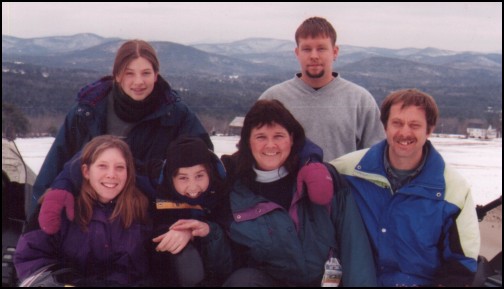 Annette with her family

I can remember, at times, when I was in school, that I felt left out of certain things because I couldn’t really talk about where my family came from. I’m ashamed to say that I sometimes resorted to lying about it.

I really came up with some outrageous stories though! I would say things like, “my Grandmother was an Indian Princess”, that “Sitting Bull was my Great-grandfather” and other totally ridiculous things like that. I guess I made up these stories so that I could be more like the other kids. On St. Patrick’s Day, we would always discuss people of Irish decent and those in the class who were Irish would talk about their families and traditions and things like that.

I guess I thought that if I made up stories about my ancestors that it would make me look important to the other kids. Of course, it didn’t take them very long to figure out that my stories were just that, stories, especially when they asked me questions about Sitting Bull. I guess when I told them that he was from Maine it kind of gave it away that I was lying. Looking back on it now, I can’t believe some of the outrageous things I said. Now it seems quite funny, but back then I was devastated.

I’m ashamed to say that I really don’t know anything about their culture and that is important to me. I would like for my children to be able to tell “true” stories about their ancestors. We took them to a Pow Wow for the first time this summer. I thought it would be great, but instead I felt even more out of place. People there would ask me what tribe I was affiliated with and again I didn’t know the answer. I felt uncomfortable telling people that my Grandmother was Micmac or that my Grandfather was Penobscot because I still can’t prove it.

Unfortunately, my father passed away in 1988 and we didn’t think to have him write down what he had found out about his family. My mother passed away in 1997, so there isn’t anyone left who would have any information to help us out. Unless someone were to recognize my Grandmother’s name, I feel that I have reached a dead end.

Those lies that I told in the past are still with me and before I say anything again I would like to be sure that it is the truth. I have always checked off American Indian on any legal papers that needed to be filed, but now that isn’t so easy. My daughter has applied for scholarships and many of them need proof that she is 1/4 Indian. Now what do I do?

If anyone knows anything that would help me I would greatly appreciate it. My e-mail address is cbs005@aol.com

Would you like to learn more about issues related tribal documentation and the heritage of contemporary diaspora Native Americans of mixed descent? Read the groundbreaking book Invisible Indians: Mixed-Blood Native Americans Who Are Not Enrolled in Federally Recognized Tribes, by David Arv Bragi.