A book review and interview with the author of the book Aunt Sarah: Woman of the Dawnland by Trudy Ann Parker

The greatest testimony to the skills of a medicine woman is that she lived to see 108 winters herself. 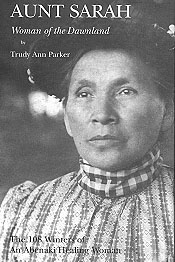 Sarah (Jackson) Somers reached out to help and heal many more humans and animals than she could ever keep track of. A St. Francis Abenaki whose homeland hugged the border between Vermont and Canada, she was known to most simply as “Aunt Sarah.”

Now, her great-great niece has captured her life’s story in a book of the same name. Trudy Ann Parker wrote Aunt Sarah: Woman of the Dawnland (1994, Dawnland Publications) not from written records, but from a legacy of spoken lore handed down at kitchen tables, beside campfires, and at the knees of several generations of relations.

Parker’s book does a lot more than tell Aunt Sarah’s story – it gives voice to a people long silent. In most educations, American history begins with the arrival of Europeans to New England, Parker says. “I wanted to offer a piece of New England history that hasn’t been told. History has not included the stories of the native people, who lived here in great numbers and are still here. History has been written around these people.”

Writing a people back into history

In the Algonquian tongue, they were known as Abenaki – aben meaning east or dawn, and aki meaning land. “They loved the land and did not see themselves as separate from, it, but an extension of it,” says Parker. “They could not fathom how a race that seemed so learned – because they greatly admired the knowledge of the White people – could have no concept of how to live in harmony with aki, their mother the earth.

“The Native Americans in New England didn’t dry up and blow away,” Parker says. “In order to go on into the future and be accepted by another culture, they married and blended in. Or they migrated west. Many of the people out that way today had their roots in the east.”

As a third-grader, Parker came home from school one day with the assignment of discovering whether any of her ancestors came over on the Mayflower. “My father grinned and told me, ‘They met the boat.'”

From that time, Parker knew that she would one day need to tell the story of the people who “lived not just on the land, but as a part of it.”

Born in 1823, Aunt Sarah came from a family that was among the last generation of what Parker calls “free-living Indians – living off the land, keeping the old ways, sort of keeping to themselves.”

When Parker’s Aunt Ivy Rose came to visit, the whole family would gather around to hear stories from the old times and for Parker, Aunt Sarah’s presence was always the most immediate and inspiring in those stories. She says she knew, even as a little girl, that Aunt Sarah’s story of helping others would need to be told one day. 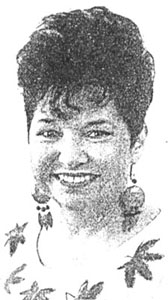 Portrait of a healer

Born in a wigwam, Sarah was the daughter of a tribal chief named Polani-Taxos-Kohla-Kost (Wolf). When Sarah was still small enough to be strapped to a cradleboard, her father grew weary of the infighting and drunkenness in the Canadian village of St. Francis and moved his family and a dozen others to a location near Lunenburg, VT., just across the Connecticut River from Lancaster, NH.

Sarah’s interest in healing was awakened early, and she asked for a medicine bag, the cache used to carry herbs, long before her seventh birthday, Parker says.

“Her Aunt Nelamano, the medicine woman who would become her teacher, told her ‘you must put something into your medicine bag only when you have learned everything about it,'” Parker notes. “The same plant whose root may have marvelous healing powers for one ailment may have leaves that could be fatal. This medicine that Aunt Sarah learned was as much a science as any other.” Like the healers who preceded her, Sarah knew that “close to the sickness lies the source, and also lies the cure,” says Parker.

One instance of Aunt Sarah’s healing skills stands out in family memory. When he was five, Parker’s father was diagnosed with a severe lung infection. Two doctors told the family upon examining him that there was nothing they could do and they didn’t expect him to last the night.

“My grandfather said, ‘I’m not losing my boy. I’m going to go get Aunt Sarah,’ and went to fetch her,” Parker describes. “She was in her late 70s or early 80s at the time.

“When she arrived, she touched my father’s hand and told him, ‘You’ll be all right, Jack. Aunt Sarah will fix you up.’ She told my grandmother they had to go down on the meadow and dig colt’s tail and poke root. My grandmother said, ‘We can’t give him that – it would kill a horse!'”

But Aunt Sarah’s plan was to make a poultice.

The next morning, a doctor came by expecting to console the family and found the boy sitting up eating soup while a wrinkled Aunt Sarah sat by his bedside. “The poultice had done what she knew it would and pulled all that nasty stuff out of his lungs,” Parker says.

A lifetime of wisdom

Sarah knew when to take her own medicine, too. At around the midpoint of what would be a very long life, she told her son, “I’ve got heart disease. I’ve treated enough people with it to know I’ve got it too.”

In diagnosing the disease, she tried, like a good scientist, to investigate the cause. “I don’t know whether it’s something that a woman’s body just runs out of at this time of life, or if the heart just can’t take any more hurt from the hard years of the winds of life.”

But she knew what the treatment was. “I have to go back into the hills and woods,” she told her son. “I need only the peace of the mountains and the clear water running in the streams to heal my tired heart.”

At the age of 65, she built herself a little shelter back in the woods and spent the summer there, Parker says. When the family tried to coax her out as winter approached, she said she wasn’t ready yet.

“She lived there through that winter and when she came out, she was healed,” says Parker. “She lived another 40 years or more – strong, vital years, helping others. She knew that getting away from pollution, away from stress, back to the land she loved, would heal her heart.”

Sarah’s service to others as healer was her perpetual religion. “I, Sarah, believe in God, just not churches,” she once said. “I see God in each blade of grass, each rock and tree and drop of rain. I know Him, and He knows Sarah.”

One of her greatest personal challenges was that, toward the end of her life, there was no one to learn from her and carry on the gift of her healing skills.

“Her own children told her, ‘Nobody uses your medicine anymore, Mama. People go to doctors now,'” Parker says. “She told them, ‘People go to Aunt Sarah when it’s too hard for the doctor to help.'”

A kind and gentle healer, Sarah could also be quite fearless. Parker describes how once, in her eighth month of pregnancy, armed only with a garden hoe, Sarah fought off several wolves. And if that wasn’t enough for one lifetime, she later had occasion to stare a cougar down.

She was also an accomplished basket-maker whose works of art survive to this day. Her hands, Parker notes, always smelled of sweetgrass.

Coming to know the healer in Aunt Sarah helped Parker find the storyteller in herself.

Fueled by others’ encouragement, she “mortgaged everything but the dog and cat” to self-publish her book about Aunt Sarah. She followed it up with Big Snow, Little Snow: Log-Driving in the Connecticut River Valley.

In 1998, the Abenaki cultural organization Ne-Do-Ba (Friends) gave her its Eagle Heart Award in recognition of efforts to share a more complete picture of the history of Aunt Sarah’s people. The book is now recommended or required reading in many college curricula, and Parker spends a fair amount of her time offering workshops and lectures for schools, historical societies, and other groups throughout northern New England.

In addition to telling Aunt Sarah’s story, Parker has served multiple terms as town clerk in Lunenburg, VT. She is also the first woman to have served as selectman in the little town where Aunt Sarah lived and died.

Parker’s own Abenaki blood loves “aki” as much as Sarah did, and she hopes that Aunt Sarah’s story serves as both a record and reminder of a people that loved the land.

“If the white race ever learns what is clean and what is dirty, many of their dreaded diseases will disappear,” Aunt Sarah said. “The White man will learn and stop his pollution or else he will die in his own filth, of his own volition, but the lilacs and the birds will also die and they have no choice.”

Aunt Sarah: Woman of the Dawnland was published in 1994 by Dawnland Publications.

Phyllis Edgerly Ring’s children’s Abenaki heritage has drawn the family close to Native culture in New England, where they can sometimes be found on the Pow-Wow circuit. She has published in Yankee, Hope, Bay Area Parent, Myria, and New Hampshire Home, and is currently working on a book for parents about gender equality in families. She also helps plan local Conversations on Race in collaboration with Green Acre Bahá’í School in Eliot, Maine.

2 thoughts on “Aunt Sarah: Woman of the Dawnland”